Last time, we wrote about the door into Noah’s Ark. There was only one, representing the only way to salvation from the coming worldwide Flood. Today, Jesus Christ is the one and only door to salvation.

From a careful reading of Scriptures, it appears that the door was never opened again. So how did Noah and all those animals get out of that big ship?

First, the Bible says “the waters were dried up from off the earth: and Noah removed the covering of the ark” (Genesis 8:13). The word “covering” is the Hebrew mikceh, which every other time it’s used refers to a covering of skin. Did Noah remove the wooden planks—the “skin” of the Ark—and build off-loading ramps?

The Bible goes on to say that Noah remained inside the Ark for another five weeks. Why did he presumably saw a big hole in the Ark during those weeks before exiting? Let’s speculate.

Perhaps once the Ark came to rest, a mechanical ventilation system that relied on the motion of water–such as what’s called a “moon pool”–had stopped functioning? Can you imagine being cooped up with thousands of animals and no fans blowing? You'd be sawing holes, too!

Also, five weeks would have given Noah time to build off-loading ramps from the planks he’d removed from the Ark’s “skin,” and some extra time for vegetation to have taken root outside for the animals to eat.

For a breath of fresh air, you’ll have to visit our life-size Noah’s Ark in the Ark Encounter theme park and see how a moon pool works. 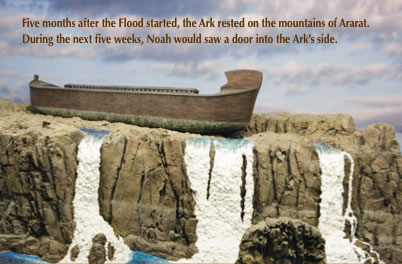 Previous Article The Door Next Article How Long for Noah to Build the Ark?