Answers in Genesis (AiG) filed a motion in federal court this morning seeking an injunction against Kentucky officials who it believes are discriminating against AiG’s Ark Encounter theme park development. The park, which is being built around a life-size recreation of Noah’s Ark, is scheduled to open in Williamstown, Kentucky, in 2016.

With the injunction, AiG is asking the court to allow the Ark project to participate in a state sales tax rebate, even as its religious discrimination lawsuit proceeds. The motion today seeks to override the blocking efforts of Gov. Steven Beshear and his tourism secretary and send the incentive application directly to a state tourism board (the Tourism Development Finance Authority), where the ultimate approval for a tax rebate is given.

AiG is asking the court that its rebate application be treated by the state as it would one filed by a non-religious group and go through the approval process without being blocked. The Tourism Authority had already given preliminary approval to AiG’s application, but when secularist groups around the country vigorously protested, the governor and his tourism secretary, Bob Stewart, bowed to the pressure and kept the application from being voted on by the Tourism Authority.

AiG and its affiliates, Crosswater Canyon and Ark Encounter, filed their civil rights lawsuit February 5 in the U.S. District Court for the Eastern District of Kentucky. The suit shows that Sec. Stewart and Gov. Beshear are engaging in unlawful religious discrimination by “wrongfully excluding the plaintiffs from participation in the Kentucky Tourism Development Program simply because of who the plaintiffs are, what they believe, and how they express their beliefs.”

Although the popular rebate program has allowed many other tourist attraction developers to qualify for a gradual rebate of a portion of the new state sales taxes their projects generate, AiG’s lawsuit explains that its application for the program has been blocked by state officials simply because of: 1) the Ark project’s religious messaging; and 2) the intention of AiG to utilize religious preferences in its hiring for the project.

“The state gave us no choice but to bring this legal action,” said Ken Ham, AiG president and the visionary behind the new theme park. “We, along with our attorneys, tried for many months to show these officials why their actions are blatantly violating our rights under the federal and state constitutions, as well as the federal Civil Rights Act of 1964 and the Kentucky Civil Rights Act. The law is crystal clear that the state cannot discriminate against a Christian group simply because of its viewpoint, but that is precisely what is happening here.”

A copy of the lawsuit, as well as a video that explains the suit’s background and dispels several myths about the project (e.g., that state taxpayer money is helping to build the Ark), have been posted at AnswersForFreedom.org.

The video features Ham and constitutional law attorney Mike Johnson. Johnson is the chief counsel of the non-profit public interest law firm, Freedom Guard, and is serving as co-counsel in the case pro bono, with Nate Kellum, chief counsel of the Center for Religious Expression. The firm of Taft Stettinius & Hollister is also serving in the case as local counsel. The video also includes clips of a 2010 Ark Encounter press conference, at which Gov. Beshear originally expressed his enthusiastic support for the Ark project. 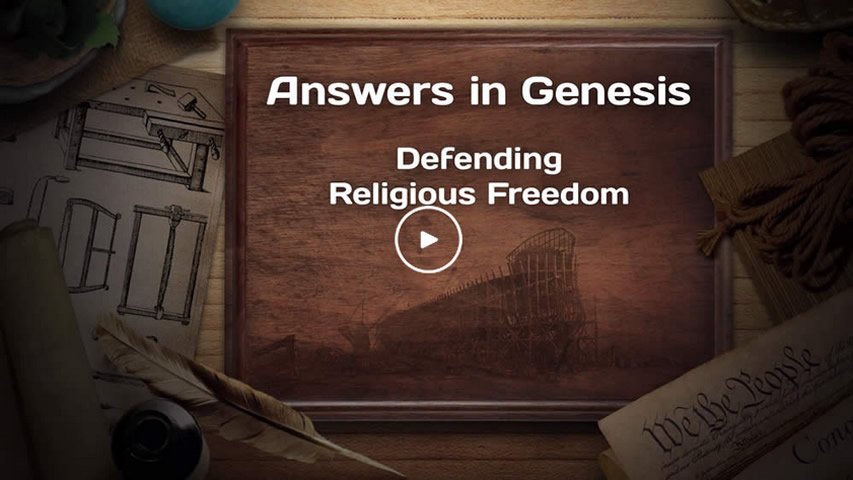 Watch the video at AnswersForFreedom.org.

“Every American should be concerned with this kind of overt government discrimination, regardless of their individual perspectives on the Bible,” said Johnson. “When such an unconstitutional state action goes unchallenged, it sets a dangerous precedent for all other religious and minority groups. If our freedom of religion is not vigorously defended, it will be taken away.”

More information on the lawsuit can be found at AnswersForFreedom.org.