Ark Encounter Will Be Significant Boon to State’s Coffers

As the Ark Encounter prepares to welcome hundreds of thousands of visitors later this summer after its July 7 opening, it looks forward to making a significant positive contribution to the state’s economy. This will be accomplished through sales tax collected at local businesses such as hotels, restaurants, stores, and so on from Ark visitors. In addition, with the thousands of Ark-related jobs that will be created throughout the region, the state treasury will see an additional boost as payroll taxes are collected from these new jobs.

It is estimated, from independently done research, that the Ark Encounter and its popular sister attraction the Creation Museum will support the creation of around 20,000 jobs in the regional tourism industry over the next 10 years of operation. These outreaches of Answers in Genesis will generate about $4 billion of economic impact to the state of Kentucky. (Per Jerry Henry and Associates.) Research further indicates that about 85% of Ark Encounter visitors will come from outside the Ark’s Tri-State area of Kentucky, Ohio, and Indiana and will bring “new” money into the region. 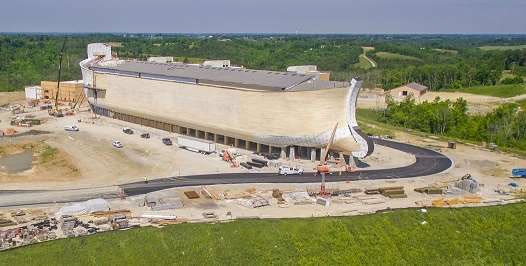 In addition to bolstering the economy in the region with increased spending in food and lodging, the Ark Encounter is expected to attract major restaurant and hotel development and other new businesses to the area around Williamstown. Trey Grayson, president of the Northern Kentucky Chamber of Commerce, notes: “As we experienced with the Creation Museum, the Ark Encounter will be a tremendous boost to our region, with new businesses being formed and existing businesses expanding to meet the demand. It’s an exciting time for Williamstown and all of Northern Kentucky.”

Local residents are excited about the potential for growth: Jimmy Million, owner of the local music store The Banjo Cellar, plans to put in a general store and a bed and breakfast. “They say this reminds them of Gatlinburg [his home town] in 1966. So they are anticipating huge growth.”

The Ark Encounter’s timing couldn’t be any better when it comes to tourism growth already occurring in Northern Kentucky. Tourism spending in Kentucky increased 5 percent from 2014 to 2015, contributing more than $13.7 billion to the state's economy, and the tourism industry in Kentucky was responsible for 186,204 jobs, up 6,241 from 2014, generating more than $3.1 billion in wages, an increase of $146 million from 2014.

Of the nine established tourism regions of Kentucky, the Ark is located in the Northern Kentucky River Region, which boasts the second-fastest growth rates in direct travel expenses between 2013 and 2014.

While the Ark Encounter can accommodate over 10,000 guests per day, research has shown that more could be expected each day during the first few weeks of its summer opening. This was the reason for establishing daytime (9 a.m. – 4 p.m.) and nighttime (5 p.m. – midnight) entry tickets for the first 40 days to help spread out the crowd. The day and evening times will also offer some differing experiences. For example, some visitors will enjoy sunset on the beautiful property.

Tickets are $40 for adults, $28 for children and $31 for seniors. Parking is $10. AiG has just announced a 7-day unlimited $99 combo ticket that includes free parking and unlimited visits over 7 consecutive days to tour both the Ark Encounter and Creation Museum. This ticket offer will prompt people to make Northern Kentucky and Cincinnati a key vacation destination and visit the many other family-friendly attractions in the area. The 7-day unlimited ticket shows the Ark Encounter’s commitment to support these other attractions in its region.

No taxpayer money has been used to build the life-size Ark.

In addition to the Ark structure, the first phase of the Ark Encounter includes Ararat Ridge Zoo and Petting Zoo, a 1,500-seat restaurant, a gift store under the Ark, and a zip line course that will eventually run a total of nine miles. The first phase will cost around $100 million, which has been raised through donations and private financing. No taxpayer money has been used to build the life-size Ark.

Marketing for “America’s next great tourist attraction” will kick into high gear later this month in anticipation of the July 7 opening. Ken Ham, the president of AiG and the visionary behind the Ark project, states: “Our TV spots and interviews on a variety of networks like NBC and the Fox News Channel, plus the posting of about 200 billboards throughout the nation, have already started and will be intensifying soon. Already, many of the world’s major media have taken construction tours and I have personally walked them through the massive three-deck ship that will also house numerous world-class exhibits.”

The Creation Museum in Petersburg, 45 minutes from the Ark site, has been visited by 2.7 million guests since opening in 2007. In the past two years, the museum unveiled a world-class $1.5 million exhibit of an allosaur dinosaur skeleton, and hosted the famous Bill Nye/Ken Ham evolution-creation debate (conservatively estimated to have now been watched by upwards of 15 million people).