As work progresses rapidly on the life-size Noah’s Ark in Williamstown, Kentucky (south of Cincinnati and right off I-75), Answers in Genesis president Ken Ham will be making major announcements about the ambitious Ark Encounter project, including the date the Ark will open. Credentialed and RSVP’d media will have the opportunity to “board” the Ark itself for both the press conference and a short walk through a part of the first deck of the immense 510-foot-long structure, take photos, and interview those involved. A special guest at the press conference will be Dr. John Whitcomb, co-author of “The Genesis Flood,” which sparked the modern creationist movement, and who is recognized as the world’s leading theologian on the Flood and Ark of Noah. Also in attendance will be a news crew from Australian TV (ABC).

Several Amish carpenters will be on site, employing some of their traditional wood-building knowledge plus using modern techniques to bring to life what will be the largest timber-frame structure in the world. 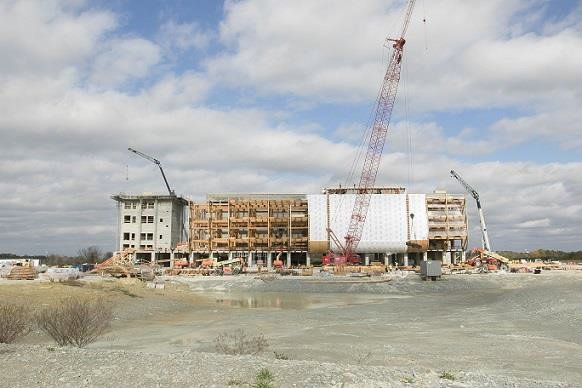 Wooden beams are being added to the Ark at a quick pace. By November 12, the elevator columns behind the Ark will be obscured by the Ark structure, and media will be able to walk on one of the decks. Photo provided courtesy of Answers in Genesis.

Ken Ham, president and founder of the biblical apologetics ministry Answers in Genesis (AiG) and the highly popular Creation Museum, and the visionary behind the Ark Encounter

PhD scientists Nathaniel Jeanson and Andrew Snelling of AiG who can speak to the biological kinds of animals on the Ark and Flood geology, respectively

NOTE: this is the construction entrance and not the entry to the future parking lot off Hwy 36.

Media will be checked-in at the construction site’s lift gate and then proceed to a parking area near a tent set up by the Ark. At that tent, media will receive hard hats and vests. Press materials will be distributed later.

Note that due to the nature of the site as a major construction zone, media must stay with an Ark representative at all times. Also be aware that there is no electricity at the press conference location, though a mult box will be available for capturing the audio of the press conference. 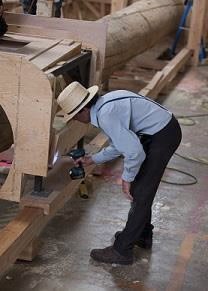 Funding for the Ark Encounter has been raised through bonds, donations and memberships toward the $91 million first phase of the project: land purchase, infrastructure, exhibit construction, and the building of the park’s centerpiece: the 510-foot-long Noah’s Ark. Other phases to come over the next several years.

Dr. John Whitcomb’s presence at the event is significant as he is the world’s leading theologian on the topic of the Ark and Flood of Noah. He graduated with honors from Princeton University in 1948 with a BA degree, majoring in ancient and European history. In 1951, he graduated from Grace Theological Seminary with the BD degree (high honors) and received the ThM degree in 1953 and ThD degree in 1957 from the same institution. He taught at Grace Theological Seminary in Winona Lake, Indiana, from 1951 to 1990.

In addition to the Ark Encounter, other outreaches of AiG, an apologetics organization, include the Creation Museum, which has been visited by 2.5 million guests since opening in 2007. Last year the museum unveiled a world-class $1.5 million exhibit of an allosaur dinosaur skeleton, and it hosted the famous Bill Nye/Ken Ham evolution-creation debate (conservatively estimated to have been watched by at least 15 million people).