The World’s Next Great Family Attraction

The rural landscape just off I-75 in Williamstown, Kentucky provides the ideal scenic backdrop for taking guests back in time as they approach the life-size Noah’s Ark, the world’s next great family theme park.

Ken Ham, president of Answers in Genesis, the builder of the Ark, declared that “we want to sweep guests away from the hustle and bustle of modern life and bring them to a large hill where the Ark dominates the landscape.” He added: “The pastoral setting is certainly free of competition from sky-scrapers and the overcrowding of large cities.”

Beginning their journey in the huge 4,000 space parking lot, visitors will board themed buses which will take them through a forested valley, eventually rising out of the valley with a perfect view of the Ark and a lake in front. They’ll exit the buses by the lake, which provides a great opportunity for fitting the entire 510-feet long structure into one camera frame—any closer and it won’t all fit!

Just to the left of the Ark, the new Ararat Ridge Zoo will feature creatures like zebras, llamas, alpacas, camels, emus, yaks, sheep, and kangaroos. Camel rides will also be available. Ararat Ridge will include a petting zoo that is even larger than the popular zoo at AiG’s Creation Museum.

The visitor’s queue line is under the Ark, as the ship was built 15 feet off the ground, much as Noah would have constructed it above ground level to accommodate the shape of the hull. This way, guests are protected by the Ark from the elements, such as rain or sun as they line up to enter the structure. Over the years, additional plants, including trees, will be placed near the entrance and will grow into a beautiful garden to make for an enjoyable experience on busy days as guests wait to enter the Ark.

Inside, wooden decks, ramps, and handrails line the ship, with large bays filled with several dozen world-class exhibits inside the 125,000-square-foot structure. Figures representing Noah and his family are clothed in ancient style, with pottery and tools among the items displayed to resemble what they might have had on the Ark with them.

Lighting in the Ark is designed to resemble oil-burning lamps or torches. In addition, many of the animal displays will feature the ancestors of modern-day animals, representing the “kinds” mentioned in the Bible. To AiG’s knowledge, the sculptures of these extinct animals are the first of their kind. Ham stated that these “high-quality educational exhibits will explain the science behind animal adaptations, and show how they are not evolutionary. The stunning displays will illustrate how Noah would only have had to fit representative animal kinds on board the Ark.” 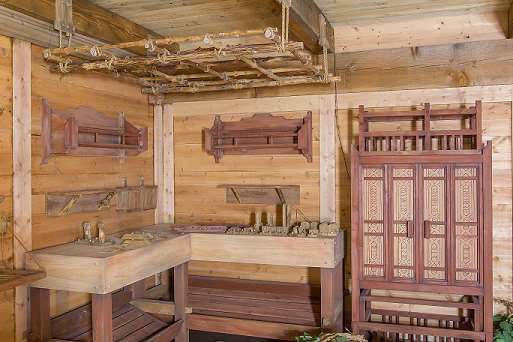 Now that the shell of the Ark is almost done, several dozen exhibits are being installed. This is the kitchen for Mr. and Mrs. Noah, located on the third deck. Photo provided courtesy of Answers in Genesis.

For the more adventurous visitors, they can enjoy miles of zip-lines. With more lines being added over the months, the course will become the largest in the Midwest. One line will run over 2,000 feet as it stretches from near the Ark to the parking lot.

Ham noted that “with all the excellent tourist attractions in the region – the famed Kentucky Horse Park in beautiful Bluegrass Country nearby, the excellent Newport Aquarium, the renowned Cincinnati Zoo, sporting events like the Cincinnati Reds and Cincinnati Bengals, King’s Island amusement park, and the great Air Force Museum in Dayton – families can spend many days here.”

While the massive Ark can accommodate about 16,000 guests per day, research has shown that more visitors could be expected during the first few weeks of opening, especially during the summer time frame. This was the reason for establishing daytime (9 a.m. – 4 p.m.) and nighttime (5 p.m. – midnight) entry tickets for the first 40 days. The day and evening times will also offer some differing experiences, including sunsets on the beautiful property. Tickets are $40 for adults, $28 for children and $31 for seniors. Parking is $10. There will be other ticket options, including combo tickets for the Ark and its sister attraction, the Creation Museum, plus a 7-day unlimited ticket to the Ark and Creation Museum.

In addition to the huge Ark structure and Ararat Ridge Zoo, the first phase of the Ark Encounter includes a 1,500-seat restaurant, a queue-line garden next to the Ark, and a gift store under the Ark. The first phase will cost around $100 million, which includes the purchase of 800 acres and installation of infrastructure, all of which has been raised through donations, memberships, and private financing.

The Creation Museum in Petersburg, 40 miles from the Ark site, has been visited by over 2.6 million guests since opening in 2007 and has proved to be a major family attraction in the Midwest. In the past two years, the museum unveiled a world-class $1.5 million exhibit of an allosaur dinosaur skeleton, and hosted the famous Bill Nye/Ken Ham evolution-creation debate (conservatively estimated to have now been watched by upwards of 15 million people).