The Ark Encounter, with a life-size version of Noah’s Ark as its centerpiece, passed its two-month milestone having received rave reviews from guests coming from all over the world. Answers in Genesis (AiG), which operates the attraction south of Cincinnati, reports that more than 300,000 guests have visited the Ark since it opened nine weeks ago. Meanwhile, its sister attraction, the Creation Museum, 45 minutes to the north, has seen attendance up 75 percent.

AiG founder and CEO Ken Ham remarked on how far visitors have traveled to visit the Ark. “I’m often at the Ark Encounter, and I never get tired of seeing the many license plates in the parking lot from states like Texas or California, which is 2,000 miles away,” Ham said. “In fact, about 95 per cent of our guests are coming from outside our region of Kentucky, Indiana and Ohio, meaning that tourism dollars are flowing into Kentucky from people visiting from all over the country. But I’m particularly thrilled to see so many international visitors, from all kinds of diverse backgrounds, and many appear to be un-churched. A group of 30 people visited yesterday all the way from Indonesia.” 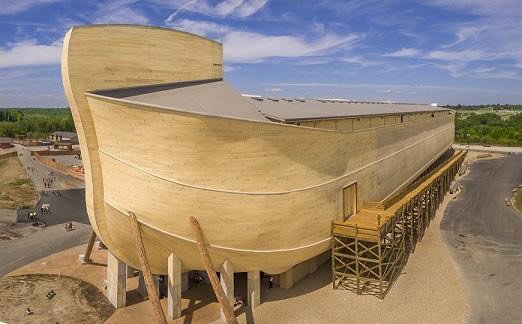 Once they see the massive Ark in person, visitors to the Ark Encounter—which have numbered more than 7,000 on many days this summer—can’t help remarking on its size and quality. “We have created countless raving fans,” Ham continued. “The three most-commonly used words to describe the massive Ark are ‘amazing,’ ‘remarkable’ and ‘awesome.’ Some have even called it the eighth wonder of the world.”

AiG expects the solid attendance to continue as motor coach tours book up for the Fall. Local businesses are also delighted about the tourism being brought to the region. In particular, Ark visitors are pouring into the town of Dry Ridge, two exits north of the Ark, filling hotels, impacting restaurants, and stopping by other businesses.

The owner of one of Ham’s favorite nearby eateries, “Beans Café & Bakery,” informed him they are enjoying a significant increase in the number of daily visitors. “We appreciate the steady stream of patrons that fuel up in the morning with our fresh baked items or relax later in the day with lunch or dinner,” proprietor Richard Hayhoe said.

Worldwide media interest remains strong in the Ark Encounter as well, with hundreds of journalists having toured since opening—a surprising number of them from international markets. German television outlets, especially, have shown a strong interest in doing feature reports on the Ark, even more so than Canadian or British media.

The Ark Encounter, a one-of-a-kind historically themed attraction, was built according to the biblical dimensions in Genesis 6; it stands seven stories high and is 510 feet in length. It is the largest freestanding, timber-frame structure in the world, located on 800 beautiful acres in Williamstown, Kentucky, south of Cincinnati, Ohio.

The Ark Encounter is strategically located off I-75, a one-day drive from nearly two-thirds of the U.S. population. An independent feasibility study by America’s Research Group (ARG) estimates that over 1.4 million individuals will visit within the first year. This same group predicted the Creation Museum would receive 400,000 visitors in its first year and 404,000 actually came within that timeframe. 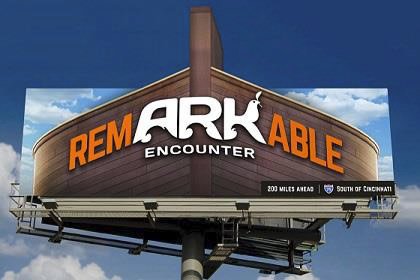 One of hundreds of Ark billboards currently posted all across America. Photo provided courtesy of Answers in Genesis.

The Ark Encounter was built to answer the most-asked questions about the account of Noah and to present the gospel of Christ. Ham told the opening day crowd on July 7 that this park is not just about entertainment, but also presents the Christian message.

In addition to the full-scale Noah’s Ark with three decks of world-class exhibits in over 120,000 square feet, the Ark Encounter theme park includes the Ararat Ridge Zoo (with petting zoo), zip lines, live entertainment, a 1,500-seat themed restaurant (which may now be the largest restaurant in America) and fair-trade shopping. The hours of operation through October are 9 a.m. to 8 p.m. Monday through Saturday, and noon to 8 p.m. on Sunday.

Tickets are available at ArkEncounter.com and at on-site ticket offices. Admission is $40 for adults, $31 for seniors and $28 for children; parking is $10. There will be other ticket options, including combo tickets for the Ark and its sister attraction, the Creation Museum, plus a seven-day unlimited ticket to the Ark and Creation Museum.

The Creation Museum in Petersburg has been visited by 2.8 million guests since opening in 2007 and has proved to be a major family attraction in the Midwest.