In the midst of unmatched perversion, when the thoughts of mankind were “only evil continually,” God had a faithful man who “found grace in the eyes of the Lord” (Genesis 6:5–8). 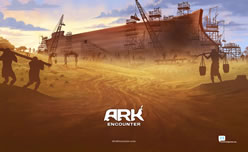 One can only imagine the mocking that Noah and his family must have endured while building the Ark. Even though he was a sinful man, he still found God’s mercy and grace in a desperate time in history. Here’s an excerpt from Answers in Genesis Steve Ham about finding grace in a flooded world:

God promised a “Seed” from Eve to save the world (Genesis 3:15), and that Seed came despite the devastation of a global judgment. While evidence of the Flood shows us the awesome power of God in judgment, the fact that any of us can even view this evidence is also a testament of God’s consistent saving grace. In an unfathomable act of His grace, God protected a line of descendants throughout human history, from Adam to the Savior. Grace is not just an act of goodwill on behalf of God. Grace also implies our great unworthiness. Grace is not something that can be deserved. On the contrary, it is something of which we are totally undeserving. Grace is afforded to the blameworthy. Since our sin in the Garden, God’s grace in the promised Seed has always been an ultimate display of His mercy and love to sinful humanity. Although he was a sinner, “Noah found grace in the eyes of the Lord.” It is because of this grace that God gave Noah the exact dimensions for a life saving vessel.

Join us as we present the truth of Scripture at the Ark Encounter, where millions of people will capture a vision of biblical history. You can partner with us by sponsoring a peg, plank, or beam that will be used to build the Ark. Visit ArkEncounter.com for more information on this exciting project!
Previous Article Making a Difference with Snow and a Peg Next Article Mything the Boat