When we think of Noah and his great ship, we often envision only a boatload of animals and maybe some bins of fodder. What else might Noah have taken into the Ark with him? Well, how about tools? 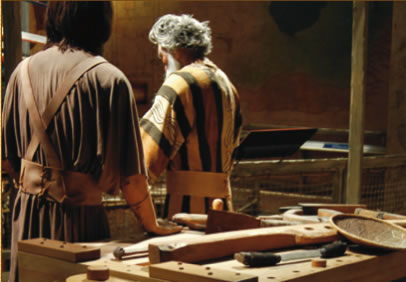 This exhibit inside AiG’s Creation Museum displays some of the kinds of tools Noah may have used over 4,000 years ago.

Can you imagine starting life in a new world where there was only you and your three sons (and wives)? We can’t—not without first collecting a vast array of useful items that would not be available on the other side of the Flood.

Noah probably had a real blast visiting all the Lowe’s and Home Depots of his day, buying tools. Some of those tools may even have formed the pattern for those we use today.

What sort of tools might Noah have needed? Well, he would have likely needed plows with iron blades, because those who forged iron prior to the Flood would no longer be living after the Flood. It might have been years before his sons and grandsons-to-come would have the capacity to mine ore and turn it into iron again.

What about saws? Good steel saws and sharp axes would be invaluable for building new homes and barns.

Cutting tools, blacksmith skills, masonry skills, and a hundred other things would be required to forge a new life on the new earth God was giving them. Although pre-Flood man was very intelligent, he couldn’t be expected to possess every skill, and Noah knew this. So, what else might he take into this New World?

What would you have taken?