At the end of the classic science fiction movie, The Time Machine, Mr. Filby comments to Mrs. Watchett, the time traveler’s housekeeper, “But it isn’t like George to return empty handed. To try to rebuild a civilization without a plan. He must have taken something with him.”

“Nothing.” Mrs. Watchett looks about the lovely Victorian parlor and her view lands upon the bookcase. “Nothing except three books.”

Contemplating building a new civilization on the other side of the Flood, Noah would have had to make choices, too. But unlike our time-traveling character in the film, Noah had a huge ship which was not only capable of carrying all the land animals required, but much more than just three books: probably an immense library on all sorts of topics (farming, metallurgy, medicine, mathematics, philosophy, surveying, architecture, and a hundred other subjects).

About 4,400 years ago, human beings, as recent creations of God, would have been vastly intelligent; many of the wonders of the ancient world we marvel at today may have been able to have been built because of the knowledge found in books (or in other formats, like papyrus) brought through the Flood on the Ark. Some of those books might even have guided the builders of the Great Pyramid.

So, if Noah rescued a remarkable pre-Flood library, where are the writings now? To quote Mr. Filby again, “One cannot choose but wonder.” Books are fragile things. After years of use, they wear out, get lost … or are destroyed. What pre-Flood treasures might have been gathering dust upon the bookshelves of the library at Alexandria, Egypt before it burned to the ground?

One can only wonder. But we do know, based on God’s Word, that ancient man was more advanced than what is taught in almost all schools and science museums. 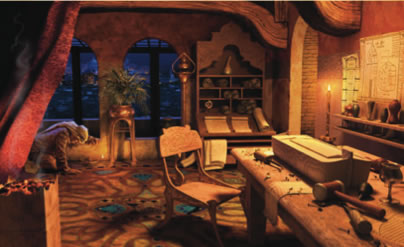