Another Meaning to Poop Deck

Inevitably when speaking about Noah and his floating menagerie, the subject comes around to how he managed all that . . . well, manure. Although ongoing research is continually reducing the total number of animals, as determined by “kinds,” that Noah would have taken with him, we must admit this still poses a mounding problem. 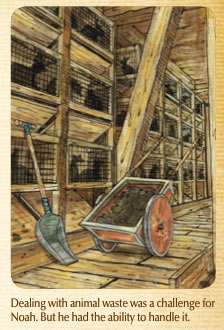 A few solutions come to mind. Noah could have dumped it overboard. Or he might have composted it to enrich the plants he probably brought with them. Or Noah might have just let it pile up in the bottom deck (though adding a certain “ambiance” to their year-long voyage).

One low-tech solution rarely mentioned is the “methane digester.” All Noah would have needed was a simple airtight container to hold the manure, the proper bacteria, and a way of piping the resulting bio-gas to places where it could perform useful work—like a heating, cooking, and lighting inside the ship.

The gas pipes might have been as basic as hollow reeds sealed with natural latex from the rubber tree, Hevea brasiliensses. Methane at ambient temperature and pressure is lighter than air and would flow naturally from the lowest point of Noah’s ship (where the digesters would be located), to the decks above, providing reliable gaslight illumination in what must have been an otherwise dark environment.

The Ark was being designed about 4,450 years ago, when mankind was still highly intelligent (Noah’s ancestor, Adam, possessed a nearly perfect brain as God created him), and Noah could easily have mastered this simple technology.

A methane digester was a practical solution for a stinky problem, which probably endeared Noah’s kin—or at least their noses—to his resourcefulness.