Within seven generations from Adam, humans were already smelting and forging metals. Genesis 4:22 states that Tubal-cain was “an instructor of every artificer in brass and iron.” He may have discovered the technique of extracting iron from ore, or he may simply have been a renowned teacher of the craft. 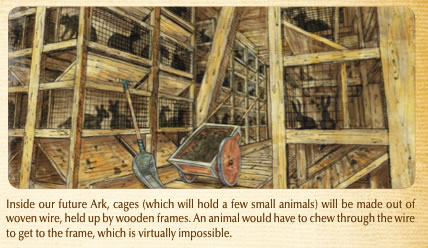 The Bible says nothing more about Tubal-cain, and although further information would have been helpful, this revelation alone helps us solve one giant, gnawing problem.

Castoroides ohioensis! This huge species of giant beaver was eight feet long, and by some estimates weighed upward of 450 pounds. It’s not hard to imagine a chisel-tooth chainsaw of this size making short work of any wooden cage Noah might have built for it!

But, you say, Castoroides ohioensis was only one of many beavers that made up the beaver “kind.” Perhaps Noah could have taken a normal-size beaver on the Ark instead.

What about the other gnawing creatures, like squirrels, rats, porcupines, hamsters, gerbils, chinchillas, guinea pigs, and rabbits? We can imagine Shem and Mrs. Shem darting about the Ark with oversized butterfly nets trying to get the little critters back into their cages … except the Bible tells us Tubal-cain had already learned to fashion things out of iron and brass. Animal cages, for instance.

One gnawing problem solved! Learn to think outside the “evolutionary cage,” A visit to the future Ark Encounter in northern Kentucky will show you how Noah might have managed all those animals on his mighty ship.