Answers in Genesis Sought Injunction Against State for Religious Discrimination

[Editor’s note: This article is a news release that has been slightly adapted for the web.]

In a victory for religious freedom in America, a federal court today issued a preliminary injunction against the Commonwealth of Kentucky for unlawfully blocking efforts by the Ark Encounter theme park developer, Answers in Genesis (“AiG”), to participate in the Kentucky Tourism Development Program. The federal court found “that the Commonwealth’s exclusion of AiG from participating in the program for the reasons stated – i.e., on the basis of AiG’s religious beliefs, purpose, mission, message, or conduct, is a violation of AiG’s rights under the First Amendment to the federal Constitution” (p. 70). The judge has ordered the state to move forward in processing AiG’s application for the available tax rebate incentives that would become effective after the Ark opens and is operating.

In his decision today, Judge Greg Van Tatenhove of the US District Court for the Eastern District of Kentucky also upheld AiG’s right to religious preferences in its hiring. In the last paragraph of his ruling, the judge declared that AiG may “utilize any Title VII exception for which it qualifies concerning the hiring of its personnel.” Earlier in his decision he stated, “Because AiG likely qualifies for the ministerial exception under Title VII, it can choose to hire people who adhere to certain religious beliefs while still being in compliance with state and federal law as agreed in the application and without their hiring practices being attributed to the Commonwealth.” 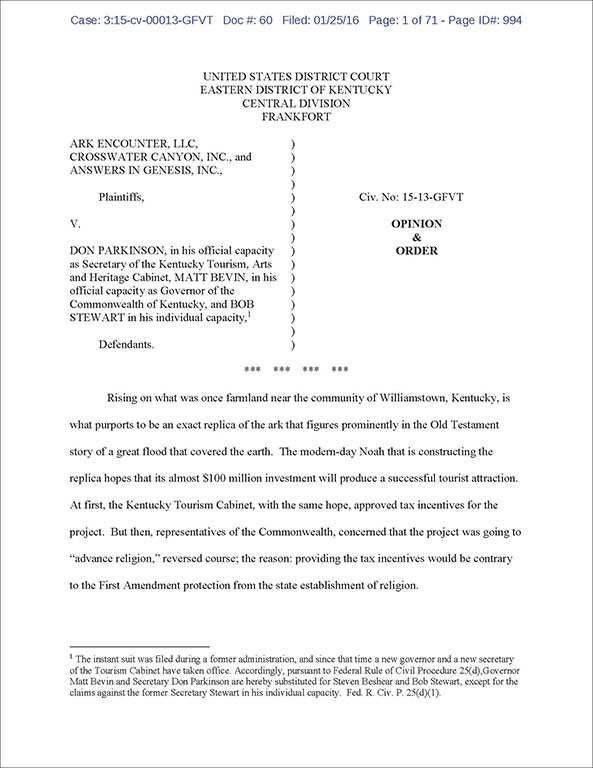 The lawsuit, filed February 5, 2015, by AiG and its affiliates, Crosswater Canyon and Ark Encounter, accused the state’s previous tourism secretary, Bob Stewart, and the former governor, Steve Beshear, of engaging in unconstitutional viewpoint discrimination “by wrongfully excluding the plaintiffs from participation in the Development Program simply because of who the plaintiffs are, what they believe, and how they express their beliefs.” These same officials previously granted approval and expressed enthusiastic support for the Noah’s Ark theme park as an economic driver and job creator for the state, until secularist groups began to exert their vocal opposition.

In his ruling, Judge Van Tatenhove posed and then answered the question, “If a tourist attraction, even one that as described here ‘advances religion,’ meets the neutral criteria for tax incentives offered by the Commonwealth of Kentucky, can the Commonwealth still deny the incentive for Establishment Clause reasons? This opinion is long but the answer to that question is short -- no” (p. 2).

Although the popular rebate program has allowed many other tourist-attraction developers to qualify for a gradual rebate of a portion of the new state sales taxes their projects generate, AiG’s lawsuit explained that its application for the program had been blocked by state officials simply because of: 1) the Ark project’s religious messaging; and 2) the possibility of AiG exercising its right as a religious organization to use religious preferences in hiring at the Ark.

Oral argument was held on July 1, 2015, before Judge Van Tatenhove. At issue was the state defendants’ motion to dismiss the case, as well as a motion for preliminary injunction (which was granted today). The ruling in favor of AiG will now prohibit the state from excluding the Ark Encounter and other applicants simply because they are religious in nature.

The decision today is a victory for the free exercise of religion in this country, including in hiring.

“I rejoice in the court’s decision today,” said Ken Ham, AiG president and the visionary behind the theme park. “The state gave us no choice but to bring this legal action. We, along with our attorneys, tried for many months to show these officials why their actions were blatantly violating our rights under the federal and state constitutions, as well as the federal Civil Rights Act of 1964 and the Kentucky Civil Rights Act. The law is crystal clear that the state cannot discriminate against a Christian group simply because of its viewpoint, but that is precisely what happened here. The decision today is a victory for the free exercise of religion in this country, including in hiring.”

“This ruling is an important precedent,” said Mike Johnson, chief counsel of the public interest law firm, Freedom Guard, who argued the case for AiG. “The court has affirmed a longstanding principle that the Constitution does not permit a state to show hostility towards religion. The First Amendment does not allow Christian organizations to be treated like second-class citizens merely because of what they believe.”

Ham noted the AiG case was about more than just a tax rebate: “We are standing up for all religious groups and churches that want to maintain their free exercise of religion guaranteed by the First Amendment when that freedom is challenged by the government,” he said. “Regarding hiring practices, the judge noted that a religious organization is excluded from the provisions of the Civil Rights Act of 1964 because of Title VII of that Act. The judge merely upheld the law.”

Ham added, “AiG has always declared that we will obey all applicable laws in hiring, and a federal judge has now clearly ruled that, as a religious organization, we have the right under the law to utilize a religious preference in our hiring.”

Meanwhile, excitement continues to build as construction on the $92 million first phase of the Ark Encounter, which is scheduled to open July 7, 2016 in Williamstown, Kentucky, is moving full speed ahead. Over $90 million has been raised for land purchase, infrastructure, exhibit construction, plus the building of the park’s centerpiece: a massive, full scale, 510-foot-long recreation of Noah’s Ark. Tickets for the Ark’s first forty days and nights of opening went on sale January 19, 2016. 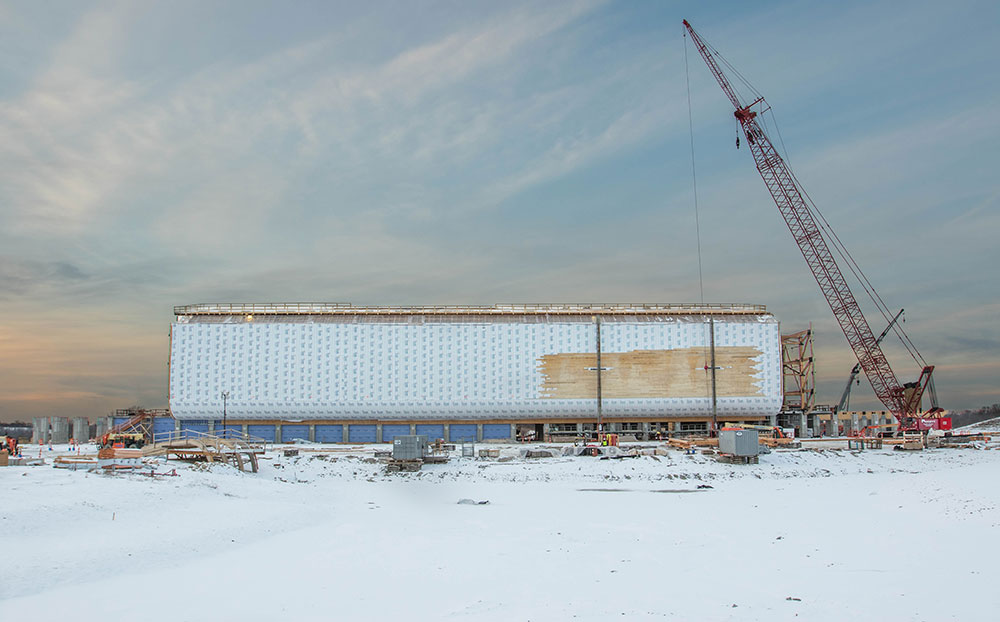 A wide shot of the Ark Encounter in the snow. The skin is being applied as the keel is being built out.

Contrary to a widely held myth, no taxpayer dollars are being used to construct the Ark, as the state tax rebate incentive at issue in the lawsuit is not made available for payment to a new tourist attraction until 12 months after its opening.

The sales tax rebate incentive works this way: the tourist attraction has to meet the requirements (as appraised by outside consultants) of the possibility of bringing a significant net economic impact to the state. If the attraction is approved for the rebate, then a portion of the sales tax generated within the facility itself will be refunded after 12 months of operation. The rebate occurs over 10 years and is calculated as a percentage (based on initial capital costs) of the sales tax generated within the attraction, up to a pre-determined maximum.

A copy of the lawsuit as well as a video that explains the suit’s background and dispels several myths about the project have been posted at AnswersForFreedom.org. The video features Ham and Johnson of Freedom Guard, who is serving as co-counsel in the case pro bono with Nate Kellum, chief counsel of the Center for Religious Expression. The firm of Taft Stettinius & Hollister is also serving in the case as local counsel. The video also includes clips of a 2010 Ark Encounter press conference, at which Governor Beshear originally expressed his enthusiastic support for the Ark project.

A copy of the lawsuit, a video explaining the background and necessity of today’s filing, and a dispelling of the myth that state taxpayer money is helping to build the Ark can be found at AnswersForFreedom.org. The video, which includes Governor Beshear’s Ark comments (he left office last month), can also be viewed here:

The video explains why every American should be concerned about overt government discrimination, regardless of their individual viewpoints, and why the freedom of religion must be vigorously defended.

It is not yet known if any party will appeal the judge’s decision, although the current governor, Matt Bevin, has expressed support for the Ark to receive the tax rebate.

Read the the court’s decision and find more information on the lawsuit at AnswersForFreedom.org. For details on the Ark project itself, with drone videos and photos of the massive construction site, and ticketing information, go to ArkEncounter.com.

Previous Article Food Tasting for the Ark Encounter Next Article The Voyage Begins Again on July 7!