On Deck One inside the life-size Noah’s ark at the Ark Encounter, you will find our half-ark model. This represents one way that the ark could have been arranged, allowing enough space on board for all the animals and provisions. As you look at this representation, you will be amazed by the details and how everything could have fit. 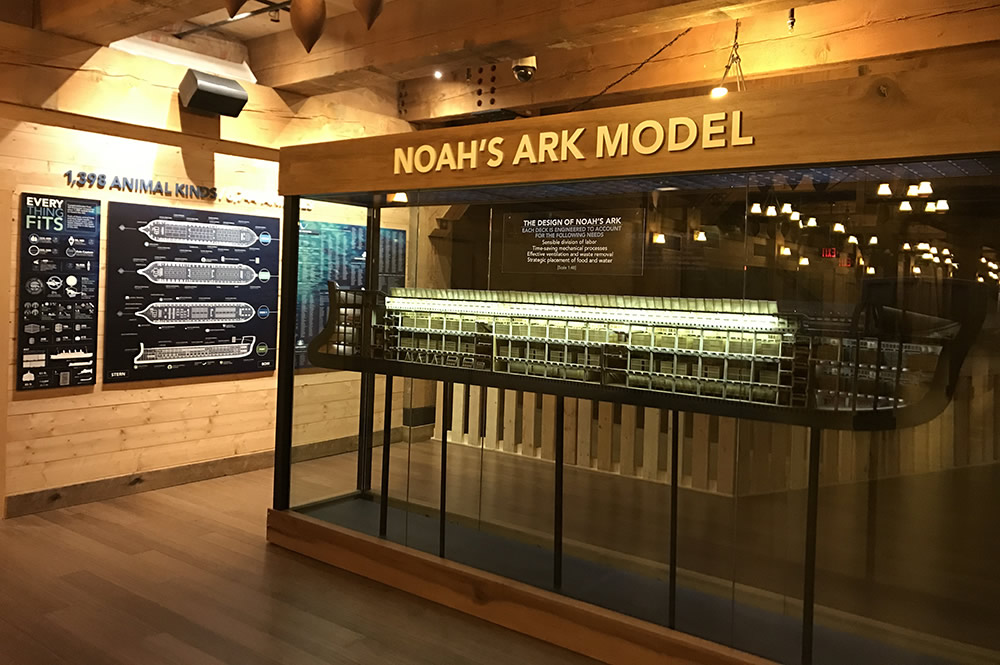 On the wall next to the model, you’ll see signs designed to show you what Noah’s family might have needed for the journey, a list of the many animal kinds that could have been on board, and more.

And, our team recently installed several new signs near this exhibit to address questions concerning the shape, design, and construction of the ark. Learn about the new signs below! 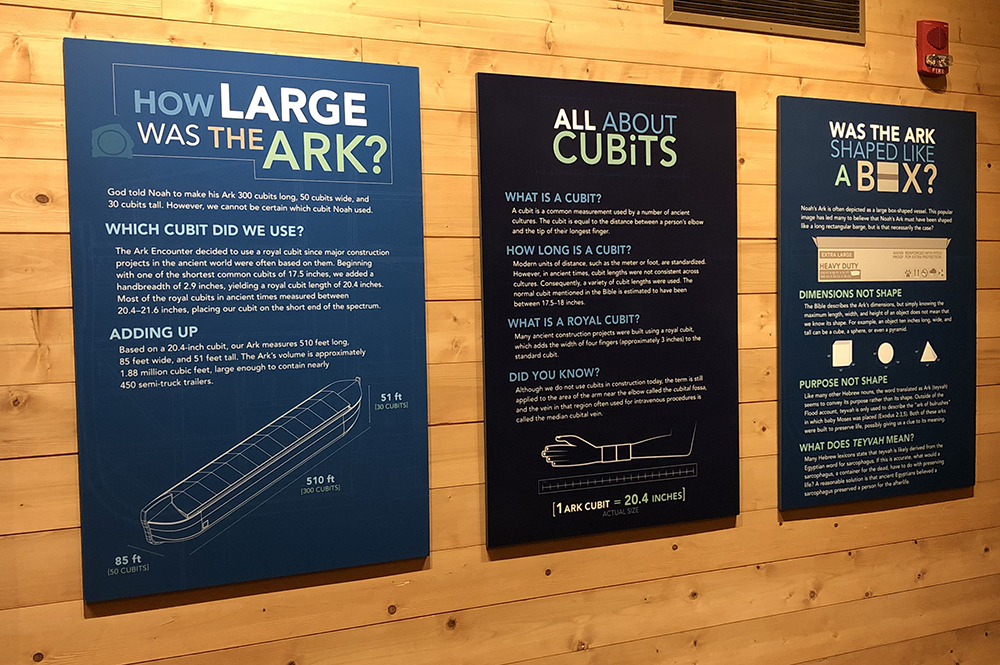 How Large Was the Ark?

God told Noah to make his ark 300 cubits long, 50 cubits wide, and 30 cubits tall. However, we cannot be certain which cubit Noah used.

Which Cubit Did We Use?

The Ark Encounter decided to use a royal cubit since major construction projects in the ancient world were often based on them. Beginning with one of the shortest common cubits of 17.5 inches, we added a handbreadth of 2.9 inches, yielding a royal cubit length of 20.4 inches. Most of the royal cubits in ancient times measured between 20.4–21.6 inches, placing our cubit on the short end of the royal cubit spectrum.

Based on a 20.4-inch cubit, our Ark measures 510 feet long, 85 feet wide, and 51 feet tall. Our design features a curved hull, which would make the ship stronger and safer in stormy seas, but it also reduces the volume by about 15%. So, our Ark’s volume is approximately 1.88 million cubic feet, large enough to contain nearly 450 semi-truck trailers.

A cubit is a common measurement used by a number of ancient cultures. The cubit is equal to the distance between a person’s elbow and the tip of their longest finger.

How Long is a Cubit?

Modern units of distance, such as the meter or foot, are standardized. However, in ancient times, cubit lengths were not consistent across cultures. Consequently, a variety of cubit lengths were used. The normal cubit mentioned in the Bible is estimated to have been between 17.5–18 inches.

What is a Royal Cubit?

Many ancient construction projects were built using a royal cubit, which adds the width of four fingers (approximately 3 inches) to the standard cubit.

Although we do not use cubits in construction today, the term is still applied to the area of the arm hear the elbow called the cubital fossa, and the vein in that region often used for intravenous procedures is called the median cubital vein. 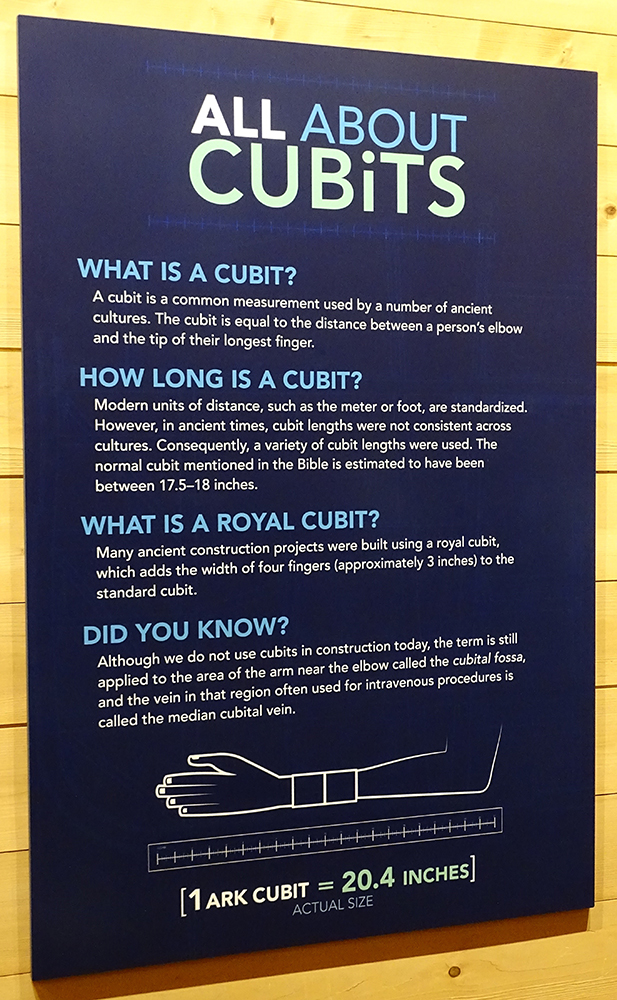 You can find more answers to common questions about cubits in our blog post, “How Long is a Cubit?”

Noah’s ark is often depicted as a large box-shaped vessel. This popular image has led many to believe that Noah’s ark must have been shaped like a long rectangular barge, but is that necessarily the case?

The Bible described the ark’s dimensions, but simply knowing the maximum length, width, and height of an object does not mean that we know its shape. For example, an object 10 inches long, wide, and tall can be a cube, sphere, or even a pyramid.

Like many other Hebrew nouns, the word translated as ark (teyvah) seems to convey its purpose rather than its shape. Outside of the Flood account, teyvah is only used to describe the “ark of bulrushes” in which baby Moses was placed (Exodus 2:3, 5). Both of these arks were built to preserve life, possibly giving us a clue to its meaning.

Many Hebrew lexicons state that teyvah is likely derived from the Egyptian word used for sarcophagus. If this is accurate, what would a sarcophagus, a container for the dead, have to do with preserving life? A reasonable solution is that ancient Egyptians believed a sarcophagus preserved a person for the afterlife. 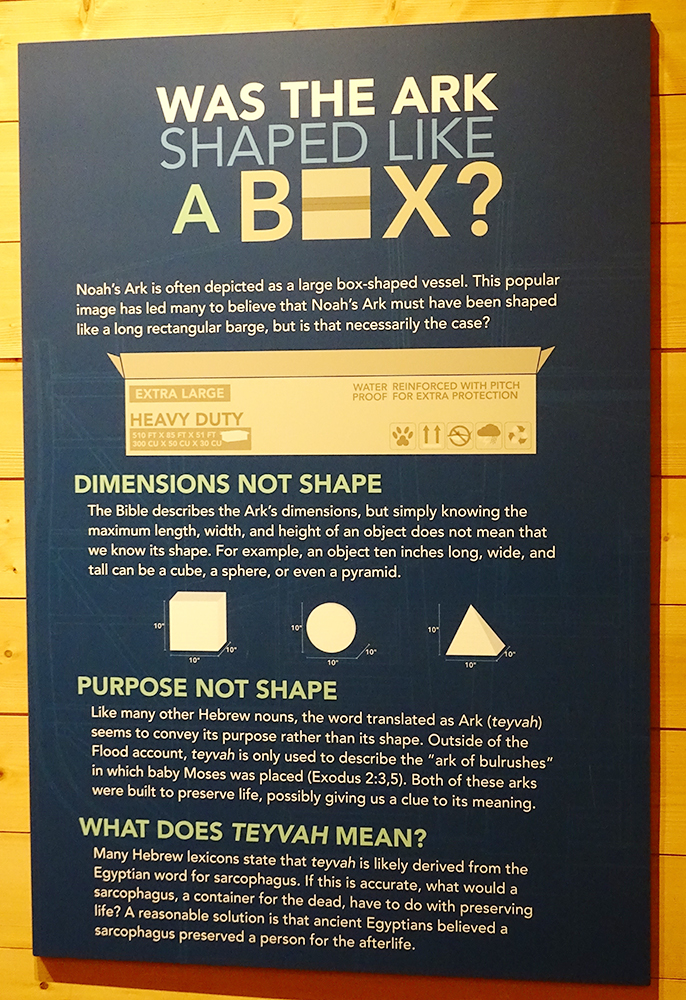 You can learn more about more signs in the half-ark model area in the blog, “Everything Fit Inside the Ark?” And be sure to keep an eye out for a future blog comparing Noah’s ark to the Ark Encounter’s!