An Amazing Story to Tell

As a thirty-something-year-old American, there are some aspects of the “American experience” that I feel I somehow missed out on—prayer and Bible reading in a public school are a couple of the first things that come to mind.

Growing up in northern Kentucky, not far from the Ark Encounter site, my dad would occasionally load the family into the station wagon and take us for rides across the hills and valleys of our region. I recall driving around Covington, Kentucky, where he attended elementary school. Dad would point out the church building where each week his class would march down the street a couple of blocks to have a pastor teach a Bible lesson. Taking a Bible to school and talking about it in class? Just the thought of doing that seemed so foreign and removed from my world.

I do recall a time when saying the pledge to the flag, “one nation under God,” was hardly controversial. And I do recollect when there were no arguments about praying before a public high school football game. Will our up-and-coming generations know what obedience to authority means? Or what about the preservation of life for our society’s most vulnerable people?

This cultural U-turn is staggering, but it must pale in comparison to what Methuselah would have seen in his lifetime. His father, Enoch, was a godly man who “walked with God” (Genesis 5:24), and one day he just disappeared because God took him. By the end of Methuselah’s life, mankind had grown so wicked that only eight people would be saved from the Flood. 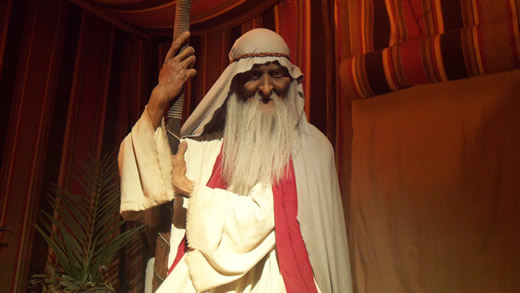 An animatronic “Methuselah” at the Creation Museum warns of the impending Flood.

Methuselah was born 687 years after Creation Week. Adam died when he was 930, so Methuselah could very well have known Adam, as well as Noah, whose lifetime overlapped his by 600 years!

In the past 125 years, we’ve seen the development of the automobile, radio, airplane, television, space shuttle, and Internet. Can you imagine what technological innovations must have taken place during Methuselah’s 969-year lifetime?

At the first thought, I would like to live on this earth for a long, long time like Methuselah. But can you imagine living in a fallen world for that long? How heartbreaking must it have been for the same set of eyes that saw the world not too far from the time of perfection to see the point where God destroyed everything because it had become so evil.

Now I’m just speculating, but could have Methuselah helped Noah build the Ark? After all, he could have had several decades of good health while Noah was constructing the boat. Like Methuselah, God has called each of us to do our part in making an impact on our world.

We have a great story to tell in building the Ark Encounter. I invite you to stand with us as we proclaim the truth and authority of God’s Word. Consider sponsoring a peg, plank, or beam that will be used to build the Ark!

For more information about Methuselah, there are several articles on the AnswersInGenesis.org website:

Previous Article Thanks Two Million! Next Article Our Greatest Need