In this series, we thought it might be fun to show you some extinct animal kinds—varieties of creatures Noah interacted with that we do not. The first group in our series is the entelodont kind. 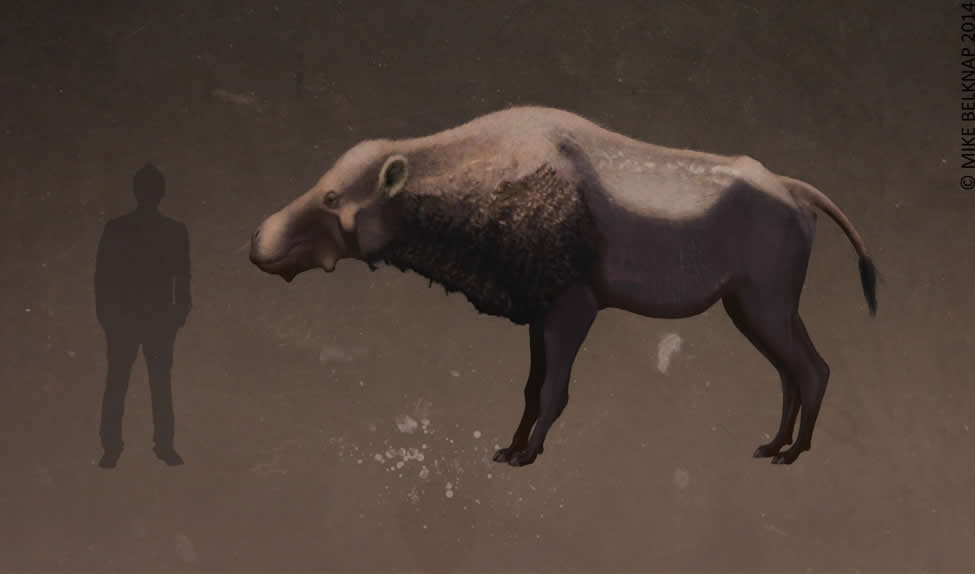 Daeodon—one of the largest entelodonts—compared to a six-foot-tall (183 cm) human. Illustration courtesy of Mike Belknap.

Originally classified as pig relatives, entelodonts are now considered a rather unique variety of animal. Based on their anatomy and other evidences, entelodonts were likely omnivorous—that is, they would eat just about anything.

Numerous entelodont remains have been recovered across the Northern Hemisphere in rock layers that were likely deposited by pre-Babel, early post-Flood catastrophes. Their initial success was perhaps short-lived, as entelodont fossils have only been found below Ice Age sediment.

Bizarre characteristics include mandibular tubercles—bony knobs on their lower jaws—and jugal flanges—large, flat, bony plates growing from their cheekbones. Their large heads were held aloft by a suspension bridge of muscles and tendons attached to tall vertebral spines above the shoulders. Entelodont necks were thus narrow yet very deep, like modern bison. Their canine teeth were exceptionally large, and each long, slender leg bore two hooved toes.

Entelodonts are just one example of a fascinating animal design lost in ages past. When we reflect on the present reality of extinction, let us look forward to the day when death, “the last enemy” (1 Corinthians 15:26), is destroyed.