Has the Ark Been Found? Site Two: Mt. Suleiman

The search for Noah’s Ark has captured the imagination of people around the world. The Ark’s discovery would be profoundly significant, but we have our doubts that it has been found in recent times. This blog series will survey six of the most popular sites alleged to be the final resting place of Noah’s Ark.

The Bible states that the Ark landed on the “mountains of Ararat” (Genesis 8:4). Many people believe that Mt. Ararat in Eastern Turkey is in view here, but the Bible merely places the Ark on a mountain in the region of Ararat, called Urartu in ancient times. As such, it is certainly possible that the Ark landed on a mountain other than the Mt. Ararat.

A military veteran named Ed Davis claimed to have seen the remains of Noah’s Ark during World War II while he was stationed in Iran. Based on his understanding of this report, Bob Cornuke of BASE Institute led expeditions to Mount Suleiman, also called the Throne of Solomon, in 2005 and 2006 to explore an alternative site for Noah’s Ark.

Cornuke provided several details about the site that he believes is a candidate for the remains of Noah’s Ark. His team found rocks that were “uncannily beam like in appearance” over 13,000 feet up the mountain, “a worship shrine,” and fossilized clams in abundance on the top of an adjoining peak. Cornuke also points to the wide variety of ecosystems in the region and the 1965 rediscovery of the Caspian horse, believed by some to be the most ancient variety of domestic horse.* 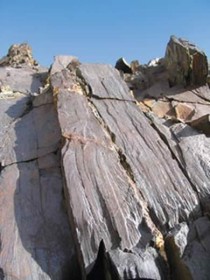 Despite these assertions, there are multiple problems with the notion that the Ark came to rest on Mount Suleiman. For example, the beam-like rocks are likely a geologic formation, the eroded edge of upended, finely bedded rock layers, according to geologists who have only been able to examine pictures. Also, it is improbable that Ed Davis’s reported sighting took place on Mount Suleiman. But the biggest problem is that Mount Suleiman lies 250 miles east of the farthest-known reaches of the ancient Urartu region. As such, this mountain doesn’t match the biblical description that the Ark came to rest on the mountains of Ararat (Genesis 8:4).

Expeditions will continue to search for the Ark. While it may not be found in modern times, we can still be confident that it really did exist, because God’s Word has infallibly recorded the account of the Flood.

To learn more about what the Ark may have been like, be sure to follow the progress of the Ark Encounter. If you are interested in partnering with us in constructing this faith-affirming, evangelistic project, please visit ArkEncounter.com.

*Each of these claims is mentioned in an article from the Base Institute: http://www.baseinstitute.org/pages/noahs_ark/17.