All Creatures Big and Small

Noah’s Ark has drawn quite a bit of attention lately. From the disastrous and blasphemous Hollywood film to this year’s made-for-television movie, the biblical account of the Flood has made headlines. Recently, a new animated movie featuring Noah’s Ark joined the fray. The film was created by a European organization and then redubbed in English with the voice talents of Martin Sheen and Amy Grant. Since it deals with the Ark, we’d like to offer a few comments about the picture. 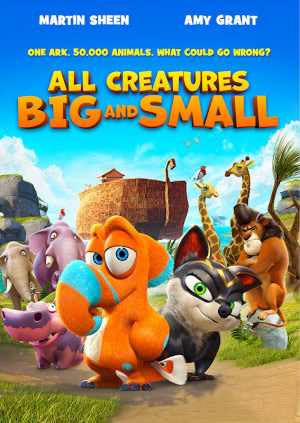 All Creatures Big and Small is a fairly light-hearted tale that was originally titled Oops! Noah is Gone. As implied by the earlier title, the movie actually has very little to do with Noah. In fact, I only remember his name being mentioned a couple of times near the beginning of the film when the lion says, “a very nice human called Noah who’s building a huge Ark.” Noah has put the lion in charge of handling all of the animal affairs on the Ark, but is portrayed more like the Ark’s captain during the Flood. We never see Noah or any other human.

The story follows two odd-looking, colorful creatures called “nestrians” who hear about the coming Flood. This father and son duo soon find out that they were not invited to board the Ark, so they disguise themselves as “grymps” (creatures that look like Tasmanian devils). The young nestrian, Finny, and the young grymp, Leah, soon find themselves outside of the Ark when the Flood hits. The rest of the movie focuses on Finny’s and Leah’s attempts to survive the rising water in hopes that the Ark will come back for them. Meanwhile, their parents do everything they can to convince the ship’s animal crew to return for Finny and Leah.

Noah, the Ark, and the Flood are not really the focus of this story; they are simply vehicles used to tell a tale of friendship, teamwork, and perseverance. Overall, the movie is quite clean with just a little bit of crude humor (the nestrians emit a foul blue gas when scared). There is a very minor amount of cartoon violence in the form of two griffins that hunt Finny and Leah throughout the film. Other than misrepresenting a few parts of the biblical account (see below), the film doesn’t contain objectionable elements and is suitable for children.

Besides the lack of Noah and his family in a movie ostensibly about the Ark, this film had a couple of other problems when compared to Scripture. The Ark is quite large in the film, but it certainly isn’t built to the biblical dimensions. The filmmakers did not understand the concept of animal kinds. Rather than showing one cat kind and one dog kind when the animals gather early in the film, there were at least six types of cats and at least four types of dogs. This might explain the movie’s tagline: “One Ark. 50,000 animals. What could go wrong?” Our research has shown that even using a worst-case scenario approach to counting the animals, Noah would have needed to bring less than 7,500 animals on the Ark.

There were other problems with the animals depicted. They were said to come from various places in today’s world (Siberia, Australia, India, and Africa), although those places did not exist in the pre-Flood world. And while most animals were shown in male and female pairs, there were three giraffes (the father, mother, and young one), and the nestrians were allowed on board the Ark disguised as grymps, which would have made four grymps. Also, the grymps that were supposed to be on the Ark were a mother/daughter pair. This might explain why they no longer exist.

The biggest caution about a film like this is the wrong impressions it can leave with people. By making a fun and cute story about the Flood, the central truths of the biblical account are neglected. The Bible tells us that God sent the Flood to destroy all of the living creatures on land, except for those on the Ark, because the world had become so corrupt. Yet, like the bathtub Ark storybooks, this movie removes the crucial points about God’s justice and mercy to make it appealing to young people.

Family-friendly movies like this can be dangerous because of the false ideas they sometimes convey about biblical accounts. If you choose to watch the film, please take the time to point out and correct the problem areas, and be sure to compare everything you see with Scripture.

Previous Article What Would It Have Been Like? Next Article Photo Tour of the Ark Studio