Who Has Visited the Ark Encounter?

Since the Ark Encounter opened on July 7, 2016, we have seen hundreds of thousands of visitors pass through. We have even had several well-known individuals who have walked through our life-size Noah’s Ark south of Cincinnati. Here are five interesting people who have visited or will be visiting the Ark Encounter soon. 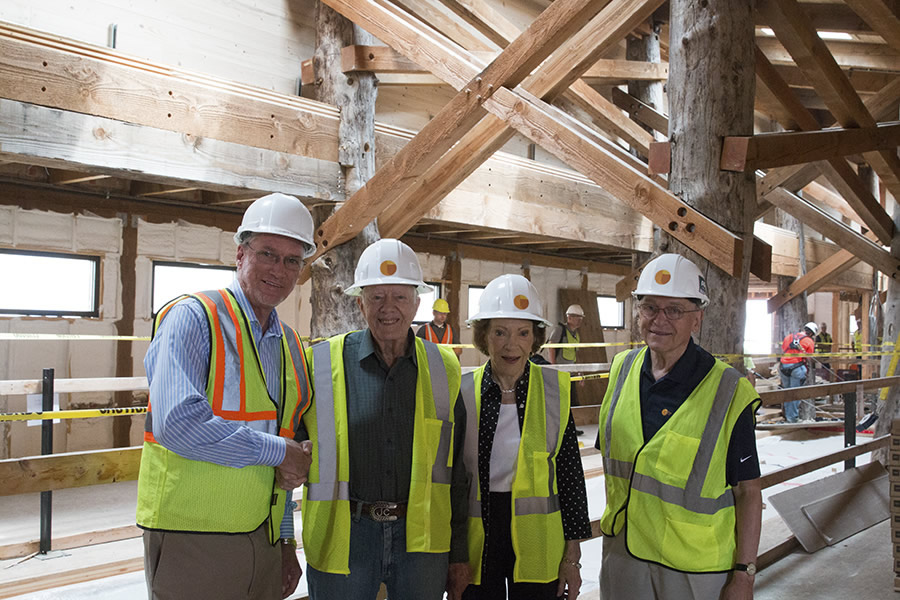 Answers in Genesis president and CEO Ken Ham, left, welcomes former President and First Lady Jimmy and Rosalynn Carter aboard the Ark Encounter, with their good friend and the project’s architect, Leroy Troyer.

Prior to the Ark Encounter opening, former President Jimmy Carter accepted the invitation to tour the Ark from his close friend and Habitat for Humanity colleague LeRoy Troyer of the Troyer Group. Former First Lady Rosalynn Carter joined him for this special tour on June 10. Although not a young-earth creationist, President Carter praised the quality of the work: “The Ark is remarkable. And it’s some of the best wood-working I’ve ever seen. My friend LeRoy Troyer has done a tremendous job.” 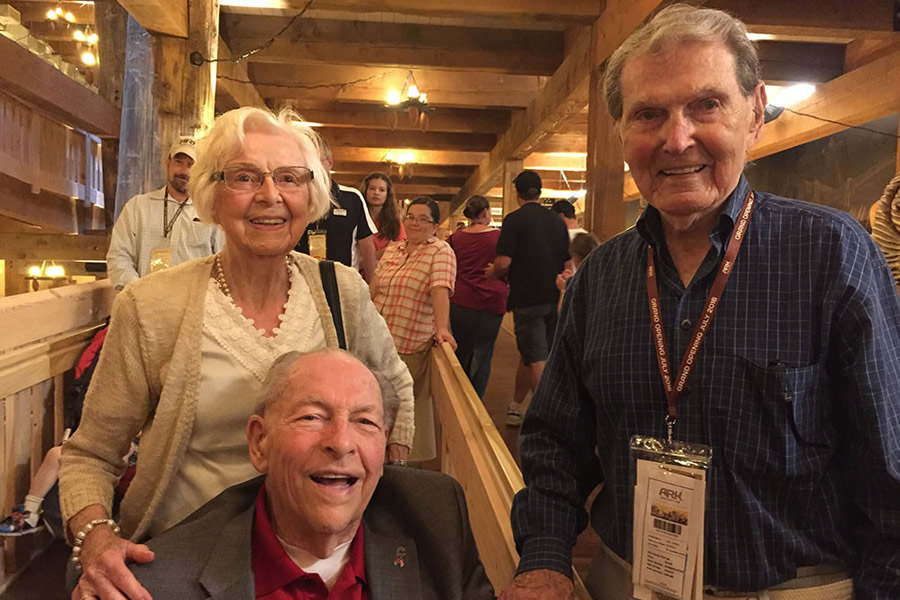 Dr. LaHaye (right) is seen reuniting with another creationist movement cofounder, Dr. Whitcomb (shown with wife Norma), on one of the Ark’s decks on July 6.

The late Dr. Tim LaHaye, best-selling author of the Left Behind novels and cofounder of the Institute for Creation Research, was able to visit the Ark Encounter the day before our grand opening. Dr. LaHaye reunited with his life-long friend Dr. John Whitcomb, coauthor of the classic book The Genesis Flood and cofounder of the modern creation apologetics movement, at the Ark as seen in the picture above. 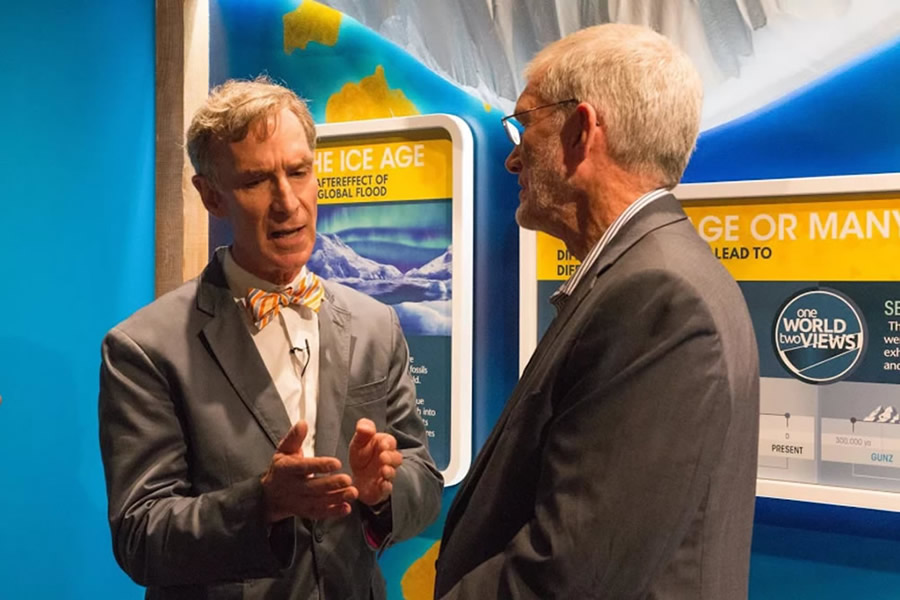 Bill Nye and Ken Ham had a very passionate discussion as they walked through the Ark Encounter together.

Ken Ham had the opportunity to walk through the Ark Encounter with Bill Nye “the Science Guy” on July 8. As the two passed the exhibits, they shared their differing worldviews pertaining to the content covered in many of our exhibits. You can purchase a copy of this second, unscheduled “debate” from our online store. 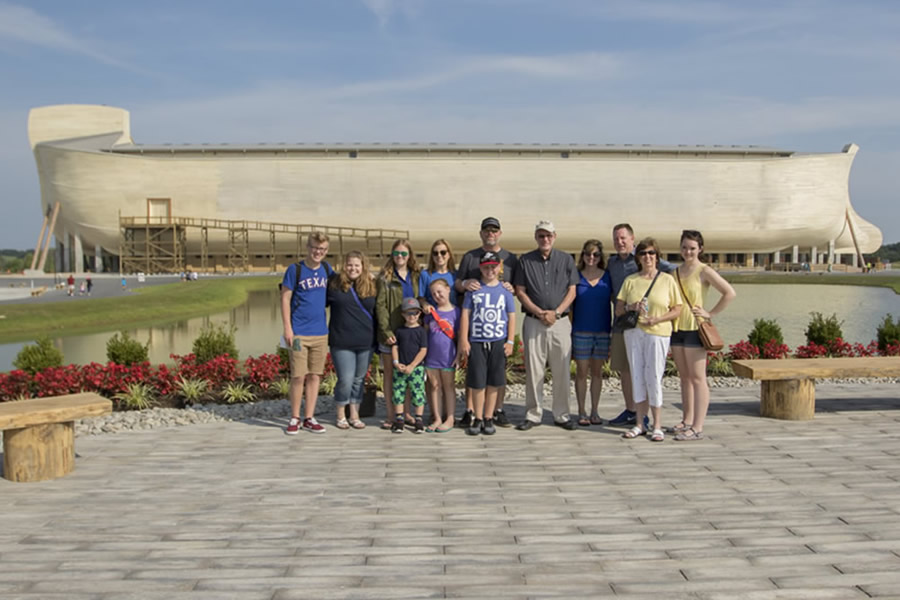 Bart Millard posed with his family, friends, and Ken Ham in front of the Ark Encounter during his visit.

Contemporary Christian music group MercyMe lead singer and songwriter Bart Millard and his family visited the Ark on July 25 following the group’s concert at the Cincinnati Reds game the day before. The Millards joined friends from Indianapolis at the Ark. After his tour, Bart wrote, “This is pretty incredible. I can imagine a music stage with the Ark as the backdrop.” 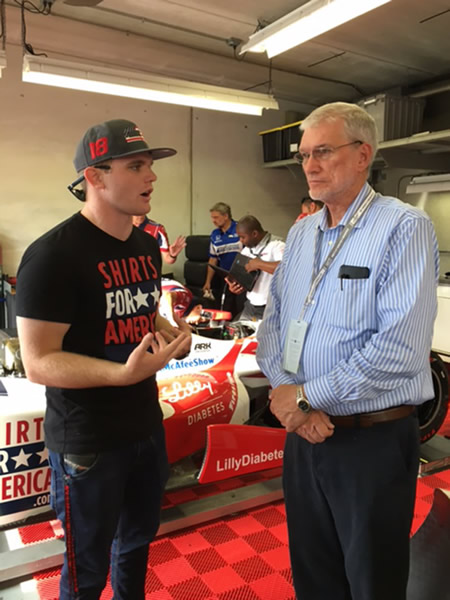 Conor Daly and Ken Ham in the garage as Conor prepared for the Indianapolis 500.

Race car driver Conor Daly, who we were pleased to sponsor as he raced in the 100th running of the Indianapolis 500, will visit the Ark Encounter on Saturday, October 22, 2016. Having been amazed during his faith-building visits to the Ark Encounter and our sister attraction, the Creation Museum, he is thrilled to partner with us to attract more people to the Ark through the world of racing—a worldwide spectator event. 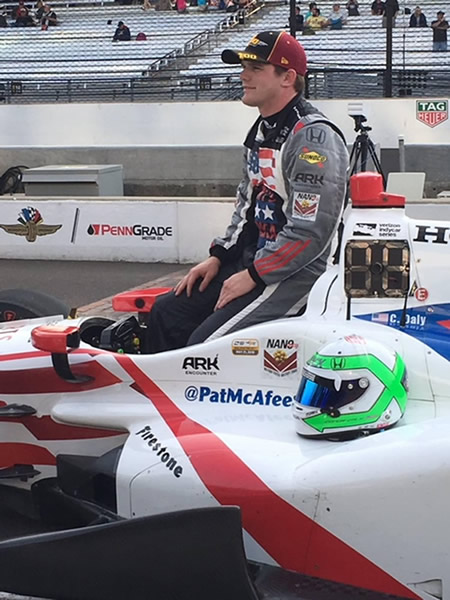 You have the chance to meet Conor and see his Indy race car at the Ark. Look for Conor’s car at the bow end of the Ark, and check out the Ark logo near the cockpit. While supplies last, he will be signing limited-edition autograph cards that feature a photo of him and his race car, which both include the Ark Encounter logo.

When you visit the Ark Encounter, you never know who you might run into as you take in all that the Ark has to offer! Join the over 400,000 people who have already visited the massive Ark.

Previous Article How Could Noah’s Family Have Survived the Journey? Next Article Learn More About Ararat Ridge Zoo Animals