Meet the Family: Noah and His Sons 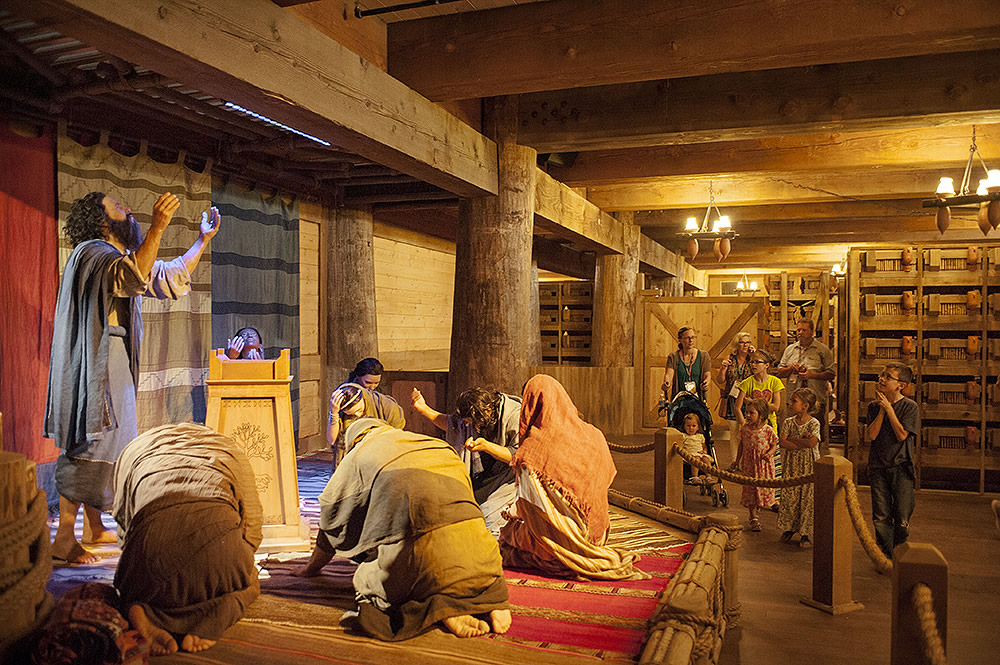 Noah praying with his family

As you explore the Living Quarters on deck three, you’ll get to meet Noah and his family and learn more about the backgrounds our content team created for each of them. How did they spend their free time? What hobbies and interests did these individuals have? How did the couples meet? What were their lives like prior to the Ark project? To distinguish biblical truths from the story we have created, Bible references are included whenever the information is directly from Scripture.

Let’s take a look at the backstories our content team created for Noah and his three sons.

Although he was 600 years old when the flood came, Noah was not the feeble old man often depicted in storybooks. He had just finished building the Ark, so he must have been quite fit. His demeanor reflects that of a man who has faithfully walked with the Lord for centuries. 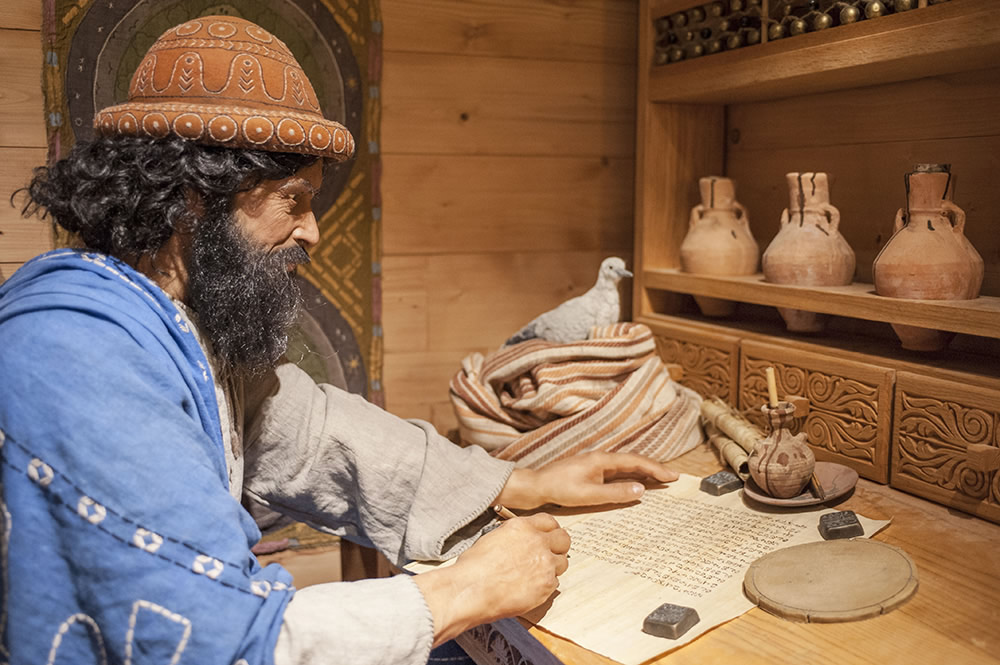 Noah’s study and library contain the majority of the personal items he has saved. Yet his room still gives him a quiet place to read, write, and carve wood. Noah built the couch (that you’ll see in the exhibit) during the flood to accommodate other family members who frequently visited for conversations about the Lord or the interesting and amusing events of the day.

Japheth inherited Noah’s adventurous spirit, although it is not very compatible with his agricultural work. Growing up around the Ark site has not afforded him the opportunity to explore, but he longs to set out once the Flood ends and he has composed songs about these dreams. 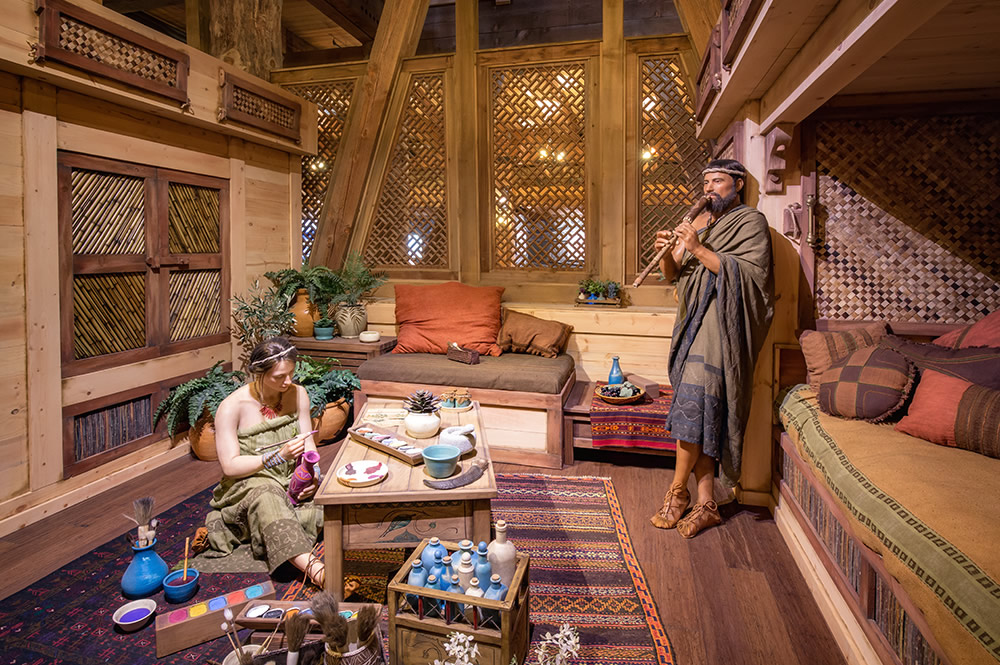 Japheth and his wife in their living quarters

The oldest and tallest of the sons, Japheth excels in farming, just like his grandfather, Lamech. Because of this, Noah charged him with growing, preparing, and storing the food for the Ark. The plants in the room, the indoor garden, and the vast stores of grain, seeds, and nuts throughout the Ark provide evidence of his success in this area.

Just like his mother, Shem is a natural at caring for animals, particularly the clean animals. They have discussed various theories about selectively breeding certain animals to produce offspring more useful for domesticated functions. 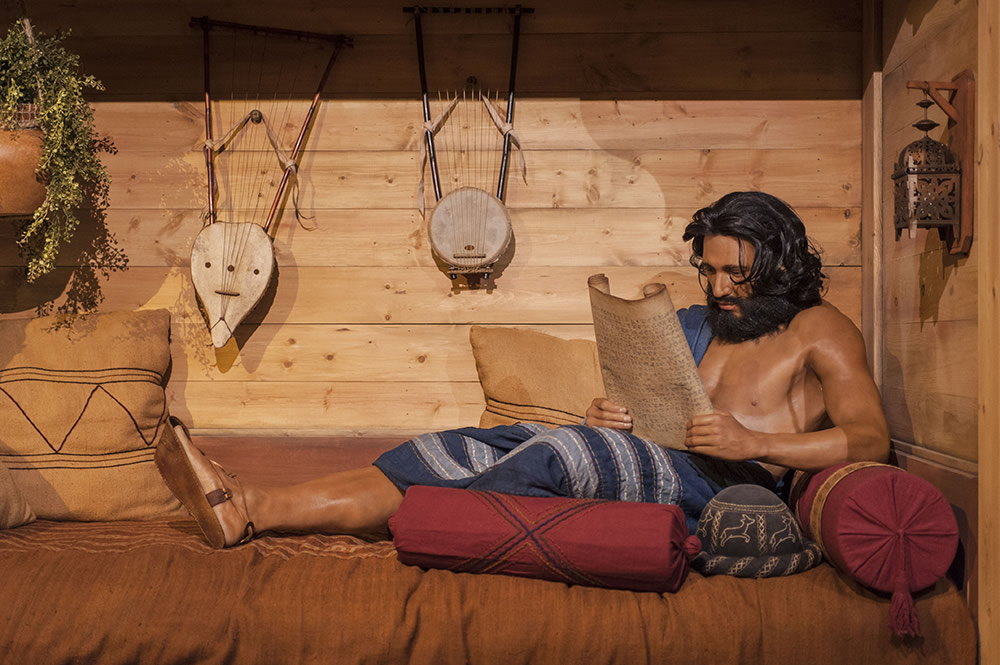 Shem in his living quarters

Shem, like his father, has developed a passion for learning about the Creator. He spends his free time studying and meditating on God’s truth found in the scrolls and tablets in the library. Prior to the flood, he examined the movement of the stars and pondered how they show times, seasons, and direction. He looks forward to seeing the stars again because they remind him of the Creator’s grandeur.

Ham’s room, designed as a place to relax after a long day, is the perfect spot for him to consider what he might invent next. The weapons displayed here reflect his concern for protecting his family following a vicious animal attack years earlier that left him scarred.

Ham and Kezia in their living quarters

Ham is the most ambitious of the sons. Growing up as the youngest brother gave him the drive to prove himself. A brilliant engineer, Ham excels in constructing and repairing tools and other items made out of wood and metal. Along with Noah, he designed and built the waste removal and fresh water systems on the Ark. 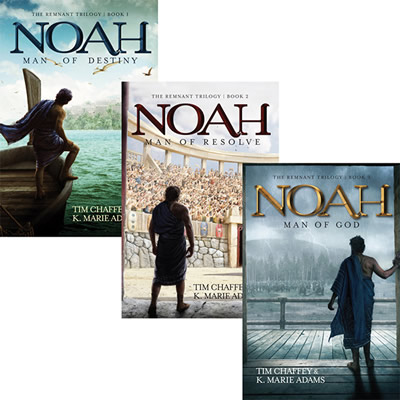 Interested in reading more of the backstory that you will learn about inside the ark? Add Noah: The Remnant Trilogy to your personal library today! This three-book series, which includes Noah: Man of Destiny, Noah: Man of Resolve, and Noah: Man of God, is a historical fiction trilogy tracing the backstory of Noah and life before the Flood. Witness the struggle of a righteous man’s battle against a culture that thought of evil continually, and explore what it may have been like for a righteous man to relate to God before the Bible as we know it was written.

You can pick up Noah: The Remnant Trilogy from the gift shop at the Ark Encounter or from the online store of our parent ministry, Answers in Genesis.

Start planning your trip to the Ark Encounter today to meet Noah and his family, and keep an eye out for a future blog to learn more about the wives! Be sure to share your favorite family photos with us on Facebook, Instagram, and Twitter using #arkencounter.