The remarkable design team that created the stunning exhibits for the Ark Encounter is loaded with talented individuals. Developing the numerous displays in our world-class attraction required a variety of abilities, such as model making, wood carving, painting, sculpting, metalworking, tailoring, and more! Here's a behind-the-scenes look at how we found many of our models and more about the modeling process below.

One of the more enjoyable tasks for members of the design team (and other employees from our parent ministry, Answers in Genesis) was serving as models for characters in the exhibits. If you look closely during your next visit, you might see Patrick Marsh (vice president of attractions design) in the role of a shaman in one of our exhibits. Ben Iocco (artist) stars as Adam in several scenes in the Pre-Flood World exhibit.

Since Tim Chaffey (content manager) is so tall, he was a natural choice for the giant, ready to execute the woman played by Maria Murphy (graphic designer) in the fascinating arena diorama. 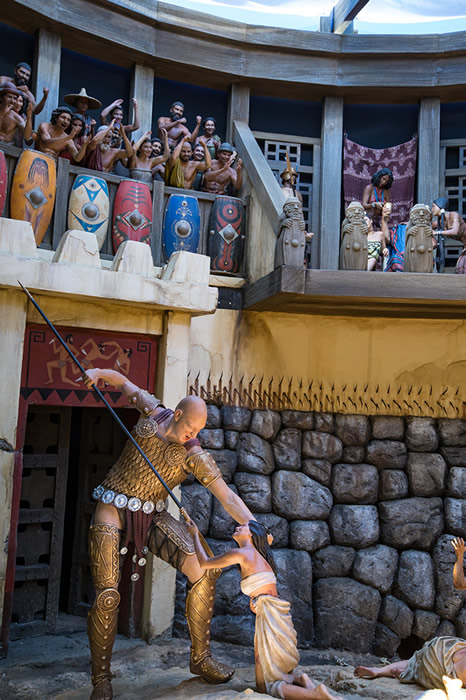 Modeling for the artwork required the employees to pose for photographs that an artist used as references. The models for 3D characters in the dioramas may have posed in two different processes. The first required the model to pose on a well-lit turntable that was then spun slowly while a scanner captured a three-dimensional image.

The second process allowed the employee to stand in the middle of more than 70 cameras. With a click of a button, all of the cameras fired at once and a computer converted the images into a composite 3D image. Learn more about this process in the video below.

The images were then sent to a 3D printer to create the figure. The character would then be meticulously painted and placed into his or her spot in a diorama. If you want to read more about this process, check out our blog, “Making of an Ark Encounter Diorama.”

As you walk through our life-size Noah’s Ark on your next visit to the Ark Encounter, be on the lookout for our model staff members! Share your favorite photos with us on Facebook, Instagram, and Twitter using #arkencounter.