In this series, we thought it might be fun to show you some extinct animal kinds—varieties that Noah interacted with that we do not. We’ve already covered five different mammal kinds: entelodonts, macraucheniids, barylambids, chalicotheres, and unitatheres. Now we present you with some reptiles. The first reptile in our series is the spinosaur kind. 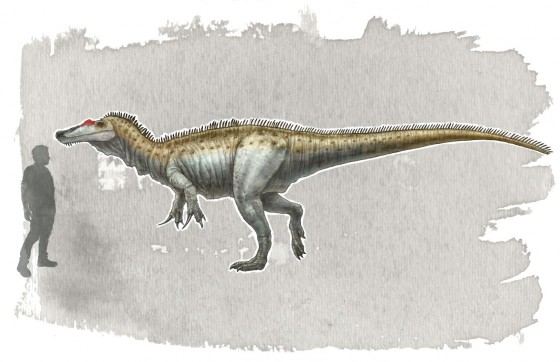 The family Spinosauridae consisted of a unique group of theropod dinosaurs with crocodile-like heads and a propensity for growing “sails” on their backs. By comparing the oxygen isotope ratios of spinosaurs with other reptiles buried in the same strata, some researchers have suggested that spinosaurs primarily ate fish and may have been semiaquatic in their mode of life. The largest known spinosaur, Spinosaurus aegyptiacus, with its curiously abbreviated hindlimbs and very dense bones, was perhaps best suited for a semiaquatic lifestyle. The remains of a fish, an Iguanodon, and a pterosaur have been found in the abdominal regions of spinosaurs. It is unknown whether or not these were common prey items of spinosaurs or simply items of opportunity snagged out of necessity during the Flood.

As with other dinosaurs, the remains of spinosaurs are presently only known from Flood strata. Spinosaur fossils have been found in upper Jurassic and Cretaceous sedimentary rock layers that may have been deposited fairly late in the inundatory phase of the Flood sequence. Thus far, remains assigned to the Spinosauridae are known from Europe, Africa, Asia, and Australia. Fossils from the Americas are dubiously assigned to the family, and thus far no material has been discovered in Antarctica. These apparent exceptions are perhaps indicative of insufficient sampling rather than a genuine absence.

Spinosaurs were among the largest of theropod dinosaurs. Adults ranged in length between 25 feet (8 m) and 50 feet (15 m) and apparently weighed between 2,200 pounds (1,000 kg) and 22,000 pounds (10,000 kg)! Not all spinosaurs had “sails” on their backs, but it appears that most did. The sails were framed by elongated spinous processes of the vertebrae and covered in skin. In Spinosaurus, these sails stretched over 6 feet (2 m) high! Some researchers have suggested that these structures supported sizable fat deposits. Others think that the “sails” acted as body-temperature regulators or functioned primarily as display organs. Whatever their function was—or functions were—vertebral “sails” of this sort were somewhat unusual; and they are certainly fascinating.

Another common feature of spinosaurs was a very narrow, elongated, crocodile-like head. Spinosaur teeth were also unusual. Most theropod teeth were blade-like, backward-curving, and serrated like steak knives. Spinosaur teeth, on the other hand, were cone-shaped with little or no curve; and they often lacked serrations sporting fine, lengthwise furrows instead. The front teeth of spinosaurs were individually socketed and spaced apart, while the back teeth in some varieties were in a more conventional arrangement. This may suggest that at least the front teeth were constantly exposed, like in crocodiles. The nostrils of spinosaurs were also placed farther back on their heads (closer to their eyes) than most theropods—an arrangement most often seen in aquatic animals, like ichthyosaurs, mosasaurs, and whales. Lastly, the first claw of each forelimb was unusually large (hence the meaning of Baryonyx’s name: “heavy claw”).

Taken together, these features and others both unify spinosaurs as a group and distinguish them from other theropod dinosaurs. They were a magnificent demonstration of God’s creativity!